The City of Dacono is located in southwest Weld County, one of the fastest growing counties in the State of Colorado. Dacono is centrally located to access both the Denver metropolitan area or Northern Colorado communities. Located in the heart of the Front Range, Dacono possesses a small town atmosphere with panoramic views of the Rocky Mountains. The city encompasses nearly 8.2 square miles, with a future growth boundary of 22 square miles. The city has access to Interstate 25, the E-470 beltway and is located about 20 miles northwest of Denver International Airport.  Spectacular natural beauty combined with a growing local economy and quick access to all the convenience of city life makes Dacono a unique and diverse community.  With visible access from Interstate 25 and a short driving distance to the mountains, residents enjoy a multitude of seasonal outdoor recreational activities.

Money Magazine Names Erie as One of the Best Places to Live in America!

The reasons people call Colorado home often include a passion for the outdoors, a diverse and dynamic community and the contemporary pace to life that appeals to all ages.  As you’ll soon discover, the Town of Erie offers the best of all of these. With our majestic mountain views and progressive civic vision, we provide a genuine small-town feel with all the reassuring qualities that implies – a sense of community, neighbors who care, and a contemporary town with modern amenities and comforting closeness.

The small-town charm of Mead makes it the perfect location for your business, as families flock to the Northern Front Range in search of fulfilling their American dream in the shadows of the Rocky Mountains.  As a long-standing agricultural community, Mead welcomes everyone with a hospitality and warmth that does not go unnoticed.  Our school district is among one of the best in the State and is regularly recognized nationally for its excellence at all levels.  Mead is one of the best, strategically located towns in Colorado. The Interstate 25 and Highway 66  intersection affords traffic counts in excess of 80,000 daily. As I-25 serves as the main north/south coordinator along the Colorado Front Range, one can travel to Denver or Fort Collins in 30 minutes time, or Colorado Springs or Cheyenne in just over an hour. Additionally, Highway 66 serves as one of the main arterials for folks travelling to Rocky Mountain National Park. Proving ideal for not only resident-based patrons, but year-round travelers as well.

Niwot is a charming Colorado community with a rich historical past that today offers some of the best restaurants, art galleries, and gift shops on the front range -- in addition to 44 unique businesses dedicated to health, wellness, fitness, and healing.  Quaint, safe and friendly, 7 minutes from Boulder and 5 minutes from Longmont, Niwot is an easy escape from the every day – whether you spend a couple of hours or all day.

Superior's history is one of coal mining. The first mines in the area were developed in the late 1800's. The Town itself was founded in 1896 and incorporated in 1904. The Town reportedly was named after the "superior" quality of coal found in the area.
Mining was the major force in Superior's history until the Industrial Mine closed in 1945. Subsequently, many people moved out of the area and the Town evolved into a quiet ranching and farming community. The Town's population hovered around 250 until recently. For a good review of Superior's history, look at Lost Superior: Remembering the Architectural Heritage of a Colorado Coal Mining Town by the Superior Historical Commission. Copies of the book are available at Town Hall.
The Town's largest residential development is known as Rock Creek Ranch. Although the land was subdivided in 1987, development continues today. Through 2006, approximately 2700 single-family homes and 1800 multi-family homes have been developed in Rock Creek swelling Superior's population to approximately 12,483.
Future development plans of the Town include commercial development, retail development, multi-family residential units, and single family homes. The Town is approximately four square miles in area and has 630 acres of parks, green space, and open space and 35 miles of trails.

In 1910, Eldorado Springs was a resort community, known for its Big Radium Pool, then the largest swimming pool in the United States. The pool, along with several other smaller ones, was known as "Coney Island of the West."[5] In 1916, Dwight and Mamie Eisenhower celebrated their honeymoon in one of the cabins at the resort.[6] Also known for its good tasting spring water, "Eldorado Springs" bottled water is sold in stores around Colorado.

The nearby Eldorado Canyon State Park is famous for its classic North-American climbing routes. 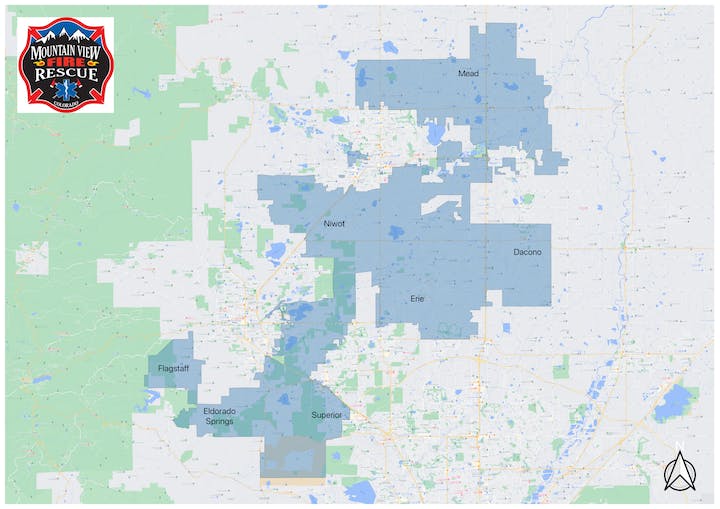